One thing that is incredibly popular to locals and tourists alike in Taiwan is their food markets, and whilst the ones in central Taipei tends to be a little more “touristy” – if you’re willing to go out of the way a little, you can find excellent ones like the Nanjichang Night Market (南機場夜市). Another one we went to post the visit to JuMing museum is JinBaoLi Market.

For those who managed to get here –  the market is about 50mins away from central Taipei and if you’re driving there; just drive straight pass the market and up the hill – there’s a carpark closeby and all you have to do is give the attendant your number plate and pay – just make sure you’re careful because it can get a little packed.

Most markets in Taiwan are aligned in such a way that they are normally organised on along one road – so to explore – it’s only one way and you don’t have to worry about missing something. Oddly, the first thing you normally see at markets is grilled sausages – and frankly, Taiwanese sausages are hard not to love!

The place itself was actually quite packed when we arrived – but as someone who loves to people watch – it’s also a great opportunity to take a few snaps.

For those who don’t know, Taiwan does imitation vegetarian food really well – well enough that even Beyond Meat initially started their sourcing for their “alternate meat” in Taiwan. So when I first spotted something that looked like offal but wasn’t, of course I had to try! 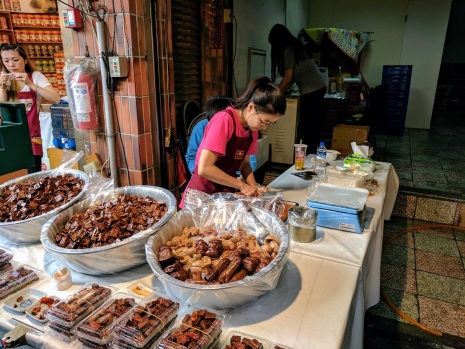 The vegetarian meat is often made of soy and uses a variety of tofu textures in order to imitate meat itself – I selected a few different varieties and although the sauce was relatively similar – each of the components surprisingly had its own distinct taste.

We weren’t incredibly hungry on the day, but for those who know me, I cannot pass up on chilli paste – so when I saw a “pop-up” store selling chilli paste – I was eager to try and it ended up tasting quite nice with a decent dose of heat. The lady said it was ok to take on the flight (it wasn’t!) – so I bought one…pity I didn’t get to actually use it.

The market itself wasn’t too big and there’s a large variety of foods – we also managed to get ourselves a good dose of ice cream! 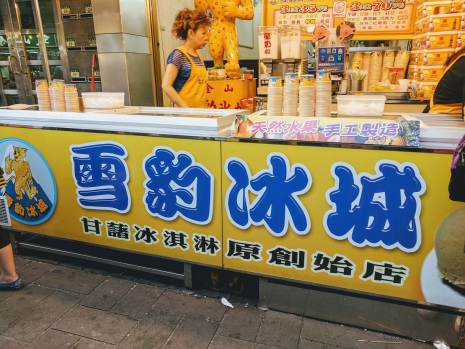