As I’ve mentioned, there’s really very little that I won’t do for a good food experience, and that includes keeping healthy and running/exercising even while traveling. So on my recent trip to Fukuoka, when we first arrived at the ANA Crowne Plaza Fukuoka hotel at about 10pm, Ms Buddha and I still kicked our holiday off with a good run at the gym before venturing out for a night snack.

Let me be honest in saying that I was a bit tired after working in the morning and then flying straight after work – so our journey of finding decent a yatai started off with getting a bit lost. After about an hour of getting lost and by then we were both very tired, we saw some lights next to the Nika River…

What was most alarming was that the location of the yatai’s were right next to the Grand Hyatt Fukuoka, which was one of the hotels I screened – would’ve made it so much easier!

It was close to 1am by then, and Ms Buddha and I were both exhausted, so we used the oldest trick in the book and went for a stall which had the most people. The staff were really friendly and assumed that we spoke mandarin when an eigo (English) menu would’ve suited me better. We huddled in with the rest of the customers and ordered – as I said before on the review of St John Restaurant, offal is always something that interest me, so I immediately went for the Pigs Intestine Ramen, while Ms Buddha went for the more civil Chasiu (BBQ Pork) and Shallots Ramen, we topped it off with a egg roll to share on the count of our hunger. 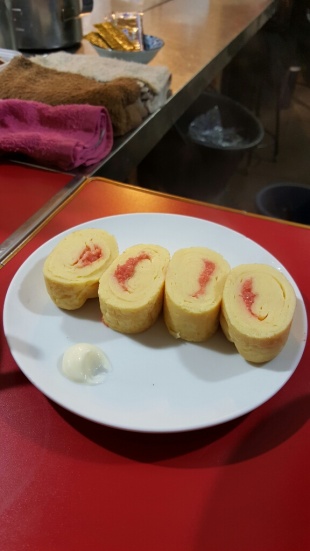 To be honest, this wasn’t the greatest Ramen I’ve had, which is still topped by Kikanbou of Kanda, but given our fatigue, the atmosphere (friendly staff and customers), and the fact that the soup base was still pretty decent, it was definitely a terrific start for our trip!

We actually walked back after the meal, which turns out the street was actually only about 25mins walk from our hotel instead of over an hour – but to me, that’s part of traveling and learning!