One thing in particular about holidays is that I normally like to go to places that aren’t too hot since that it makes you sweat less and therefore you don’t end up after a day’s walk with stinky clothes. So when Ms Buddha wanted a short trip away late last year, we picked Bangkok since that Bangkok is hot all year round anyway, so might as well go when Hong Kong is still relatively warm and I’m not exactly “escaping the heat”.

Overall, Thailand was great, there’s a lot of good food – very sticky food – and generally the city is quite hospitable – it does however seem to lack the finesse of countries such as Japan and Korea – but that aside, the culture of the place is amazing to say the least, and one experience that I remember vividly was the visit to the Grand Palace:

Getting in is somewhat an arduous process if you didn’t read the tips beforehand, for one, you cannot (and this is a firm “Cannot”) wear shorts or skirts into the palace grounds – and in that heat, it is quite easy to forget that point. If you do forget, there are “pants extensions” that you can rent and wear into the Palace – wearing of these “extensions” at all times are enforced by the guards within the Palace, so please don’t remove them like some clueless (and frankly rude) mainland visitors did – because you will be stopped and told to put them on again.

Once inside, you will be in the courtyard and realise that the place is properly “Grand” – the wall surrounding the palace offers some shade, but you’d find it hard to escape the heat because the blazing sun will reflect off all the gold that covers the place. 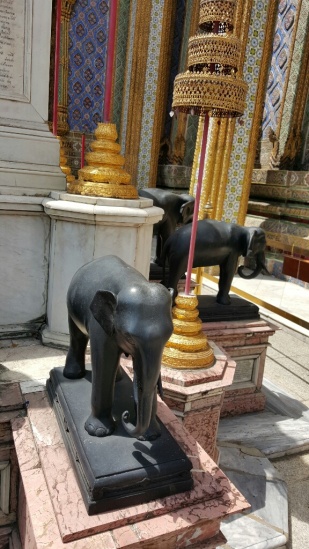 Feel in love with this one! 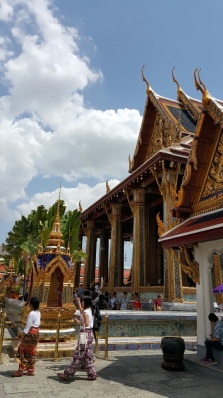 There are tour guides available and you can join one of the tours, but Ms Buddha and I just winged it and piggy packed off whatever tour was coming through just to get some tidbits on what each decoration was showing – listening to English when there’s an English guide and listing to Mandarin when there’s a Mainland group – ending up being quite enjoyable. Although at some stage we needed to take a break because it just got too hot. They don’t sell drinks within the grounds from my understanding, but do sell chilled towels for you to wipe yourself down with.

After inspecting all the different paintings, being the child that I am, I started making an effort to capture the “gods” that were painted along the walls – it kind of became something like a “Pokemon Snap” adventure. 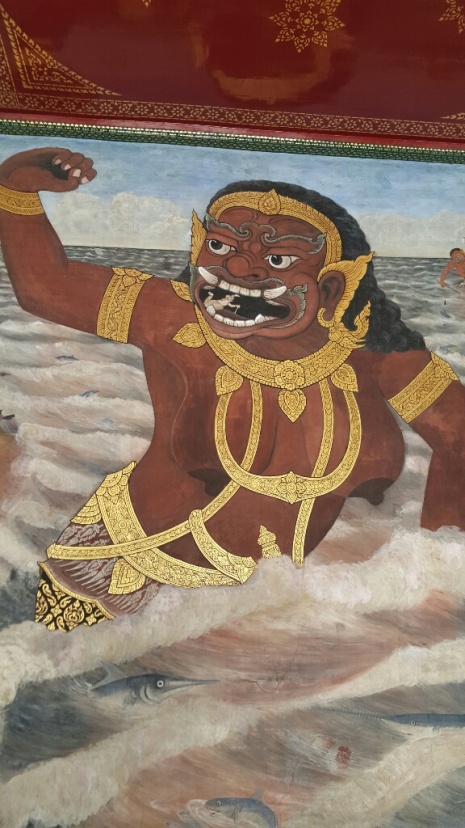 By far my favourite!

After exploring the walls area, you will eventually come to a doorway directing you to the palace itself – it is properly big and it does make you wonder why anyone would need to live in a place that big to begin with…

After exploring the Palace, we made a short walk over to the Wat Pho – which is known as the Temple of the Reclining Buddha – a 46m long Buddha that spans across a long building.

Personally, I found the Wat Pho a much more impressive monument as it does make you wonder what compels someone to commission and build something like this. You have to remove your shoes to go inside and it’s practically impossible to take a photo of the entire Buddha with one picture. 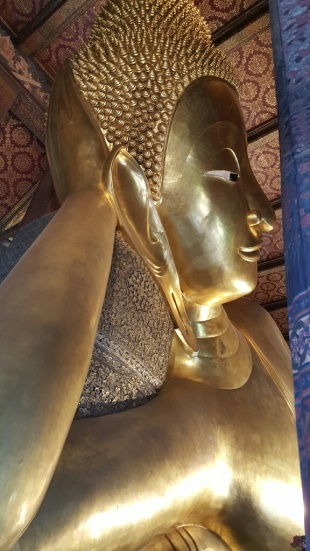 Buddha even has a gold pillow

As far as the camera will go

One we finished touring the Buddha, we made our way to the rest of the grounds, and there were some very interesting items – and also a pig that I liked.