With our super short trip to Nanjing over – I was looking forward to seeing how the airport lounges were in China – check-in was quick and there was a dedicated security line for business class passengers, that said I was held up at the security because they had to inspect the power bank that I had at length. Post the inspection, we made our way to the V7 Lounge which was up a set of escalators – the airport is quite bare but at least there was “red carpet”.

Once inside, we made ourselves comfortable, it wasn’t that crowded and the environment is quiet enough to just relax – that said – the food looked pretty terrible in addition to the fact that people were coughing into the food… 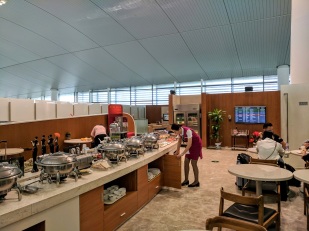 To be honest, the lounge whilst adequate, is not a place you’d tell your friends about – and in the end, Ms. Buddha and I got a bit bored and decided to explore the rest of the airport a little – funny enough, the airport had an imitation antique exhibit.

Now for those who don’t know much about air travel in China, the airspace is owned by the Communist military, and oddly enough they are almost always having something on that causes hours of delays – so when we were told there was a delay, we just smiled continued with our podcast/music – the bad thing was a group of Aussie students missed their connecting flight back home. In the end, the delay was about 2.5 hrs and boarding was pretty smooth – the cabin is the regional business class that Cathay is known to have – menus were distributed very quickly.

Ms. Buddha and I were actually feeling a little hungry after the disappointing lounge food and also the delay – so we both went for the food. Ms. Buddha oddly went for the meat although she said it was actually pretty decent. I went for the fish instead and Cathay’s catering has always been decent with seafood – service was brisk and efficient – although the staff looked a bit tired (probably because of the delay.

In no time, we were landing back into Hong Kong – which you always know when you see the islands dotted around the area.