Living in Hong Kong, there seems to be an odd perception by the people here that “there’s no good food in the UK” – to which I would say – “you just don’t put the effort to find them”. Deep down, we are inherently lazy as human beings and likes to be taken to places offering great food without ever doing the research. We are also inherently afraid to take risk, and as such won’t normally stray too far away from what we culturally grew up eating. As such, I would probably find more truth if people said “there aren’t any good Chinese food in the UK”; but why would there be? When you’re in Japan, would you look for Argentinian cuisines? That’s why we found Scran and Scallie – which I’ll start off by saying it was damn good (albeit a little bit fancier) pub food!

It was raining a fair bit and we arrived quite a bit earlier, so we found the parking spot and sat in the car until the “free” period started – reminds me of Sydney when you keep checking the sign to make sure you won’t get booked.

When we got in, we were welcomed by some very friendly staff (great start) and had a spot which was warm and private to inspect the menu. The couple next to us must’ve been long time customers because they knew the staff and their kids by their first names. 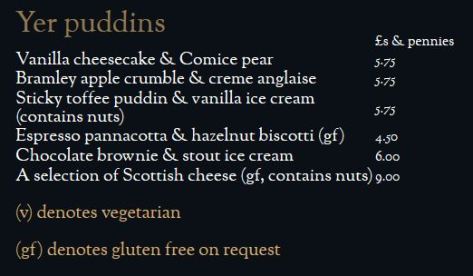 While we decided on the menu, I had some whisky and Ms Buddha went for the Bloody Mary.

I knew that I will be having something a bit more fatty for the main – so I ordered the Chicken liver parfait as the “lighter” option for to begin with as warm food tends to make me feel full quicker. Being cold, Ms Buddha went with the Ravioli – which looked and smelled amazing – apparently it tasted even better!

After the entrees were done, our waiter came around and expertly cleared the plates – what was exceptional to the service was how relaxed and friendly he was – I really give extra points when staff are casual enough while still maintaining a high level of professionalism.

Next came the mains and one of my old favourites: Fish and Chips!! The value of good fish and chips in my books rate definitely in the top 10. And Scran and Scallie’s Fish and Chips were very good – although the fish itself could had been overdone by just a fraction. Ms Buddha went with the pie, which surprised me because she’d already had Ravioli – but it must’ve been tasty because she polished it off without stopping.

After the mains were done, we were ready for something to satisfy our sweet tooth and we both love a good apple crumble. My opinion is that the creme was just slightly a bit too strong so that apple’s acidity and flavour was slightly overpowered – that said, the texture of the crumble and apple together was fantastic!

Overall, the food and the experience was wonderful, Scran and Scallie serves up a good pub foodie menu and the service was second to none, it explains why the couple next to us have been back so many times (they didn’t even live in Edinburgh!)