There’s something odd with the “direct” flights that Cathay has between Hong Kong and Fukuoka, and that is the fact that it includes a stopover in Taipei. Whilst that is not an issue because it also allowed me to visit the Cathay Taipei Taoyuan Lounge – Review, it does mean that you end up having to have a rushed 1 hr stopover in Taiwan where you have to go through security checks again.

That said, the Cathay Lounge is incredibly nice there and so we set off from Fukuoka to Taipei very happily!

As usual, with Business Class, we were the first bunch to board and were offered welcoming drinks as everyone boarded and got settled, the menus were also offered very quickly.

As Ms Buddha and I have gotten into the habit of trying as many different things as possible, I went for the Beef this time and she went for the Mackerel. It always amazes me how efficient the flight attendants are during these short haul business flights – they offer drinks, towels, menus, starters, main, desserts, clean up and also another round of towels in less than a couple of hours!

First to come was the cous cous starter which is something that I am very fond of, something about cous cous just makes me very happy – and it is also a great source of protein with very little fat!

While we dined on the cous cous, the mains came around and I was really glad that I chose the beef because it was cooked proper medium (instead of “well but we’ll call it medium because it hasn’t turned into a charcoal yet) – and the meat was flavourful and still tender.

Ms Buddha stated that the fish was still a little too salty, which is frankly an opinion that I have had about the food on Cathay flights for some time. (Although it does seem like it’s improving – or it could be my taste buds are getting worst).

Once the mains were finished, they handed out Ice Cream! Which was a Japan only flavour! And Ms Buddha loved it!! 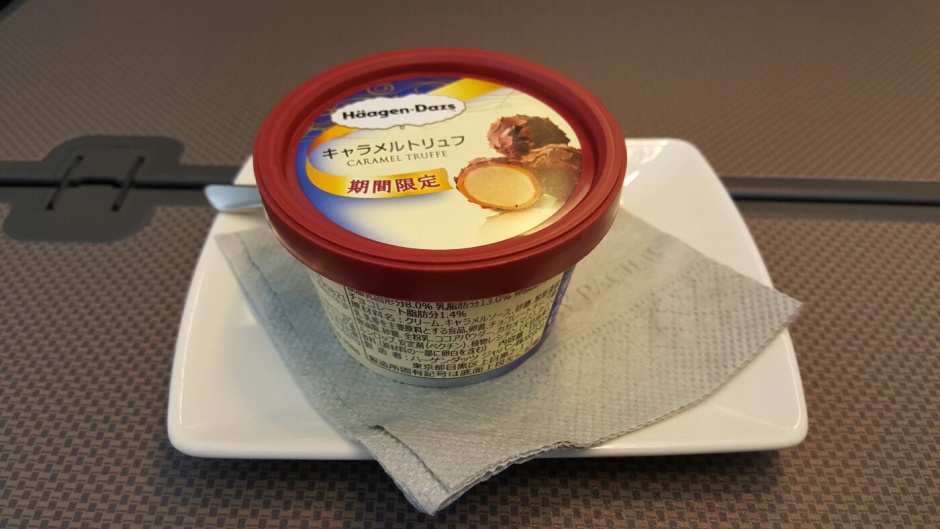