For both Ms. Buddha and I, one of the things that we do on an annual basis is that we go back to Sydney at least once a year to visit our family – the fortunate thing about our company is that we have an office in Sydney which mean we save a bit of leave! That said, we have typically taken the Friday night red eye back to Sydney so that we can at least spend the weekend with family before working. This year’s trip was no different after work, we headed straight to the airport.

The Pier Lounge is the newest Cathay Business Class lounge and it’s also become my favourite – it’s located around gate 65 which makes it much less crowded than The Wing. Given we were flying the red eye – both Ms. Buddha and I wanted to shower first – good thing they had ample shower booths available. 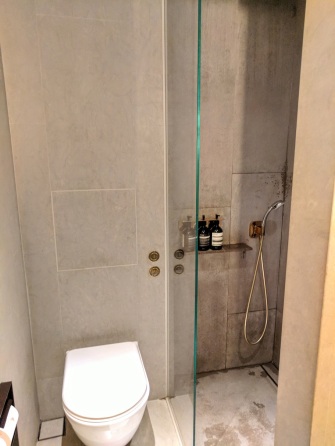 The shower booth is actually quite comfortable, and they’ve also fixed the issue you may find in other lounges where the heat from the light can cook you!

The Pier Lounge has 2 separate food areas, one area for Western food and the other is a more traditional Chinese offering. Since that I finished my shower waaaay before Ms. Buddha had finished, I decided to feed myself first in the Chinese area. 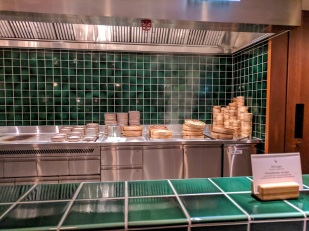 The Asian area has a mini buffet and also counter area where you can order noodles made to order – I had their famous Dan Dan Noodles plus a few of their siu mai (which I love!) The quality of the food in the lounge has always been quite consistent – which is great.

Once done, I looked around for Ms. Buddha but it seemed that she was still showering, so off to the Western area I go!

Typical of Western food, there’s a few more fried items and overall, the quality and flavour is quite decent – although a little oily for about 8pm at night.

I felt full by the time I finished and still Ms. Buddha was still not done, so I waltzed to the bar area and got my regular whisky on the rocks 🙂

After a moment of waiting, Ms. Buddha came out looking happy and relaxed! And also very hungry! See below!

With shower done and bellies fed, we relaxed a bit more before heading out to the gate for boarding. As per usual, boarding was smooth and we were comfy and bum in seat in no time!

Shortly after take-off, we were presented with menus – the food offering looked a bit too much so in the end I just asked for some water and a gin tonic while I enjoyed a few movies before napping – I did ask for breakfast though. 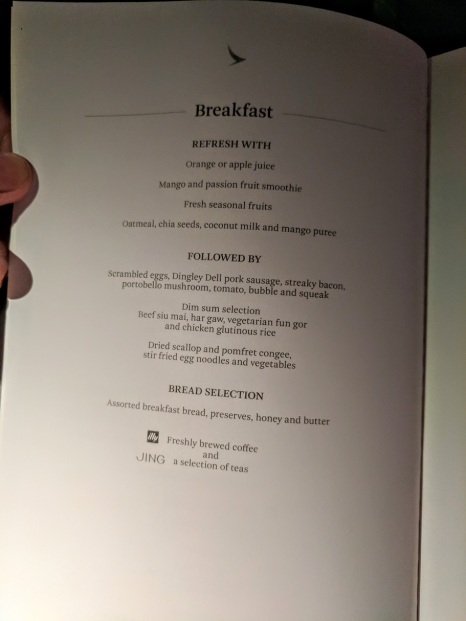 Business Class breakfast on Cathay flights tend to have two options, a Western and a Chinese one, Ms. Buddha typically go for the Chinese option (which is Congee) and I went for the eggs. Ms. Buddha said the noodles were a little too salty and thankfully the eggs on this flight were delicious! Shortly after breakfast, we landed smoothly into Sydney – a very comfortable flight.