One thing that I do enjoy doing when going away is to try the food on flights, I know that there are often many complaints about the food quality on planes, and my perspective is that they are often a little too salty for my liking, like the beans on my recent Cathay Flight from Hong Kong to London.

The CX254 flight is a night flight so we arrived at Heathrow slightly earlier (because we wanted to do some tax refunds) to experience the lounge, unfortunately, the Cathay Lounge was being renovated at the moment so we were offered the use of the No.1 Lounge. (You can see the review here).

The flight itself was slightly delayed so we spent a bit of time people watching (and listening after witnessing a young lady with an incredibly potty mouth); so I was frankly quite hungry by the time we boarded. Thankfully, the menus were distributed quickly. 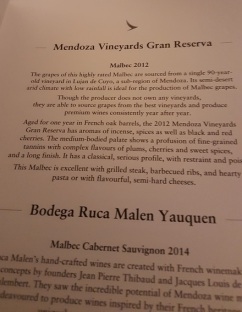 While looking at the menu, the lovely crew came through and offered a round of drinks with some nuts, I was ready for my drink and tried the red that was on offer for this flight.

After the pre-meal drinks were finished, I was offered more wine (how can I refuse), table set, and entree provided – the entree was the terrine and whilst the taste was good, the texture was a little dry.

After the starters, I selected the Three cup chicken because firstly I was very hungry, and secondly because I really wanted some rice after spending almost 2 weeks without it. The chicken was delicious (though still slightly too salty) and Ms Buddha had the Salmon this time, which was also nicely done – for some reason, Cathay gets it right with fish.

To finish off, I once again had the cheese plate, but declined the chocolate because the port was sweet enough.

Surprisingly, maybe it was the alcohol, but I slept like a baby during this flight, I’ve long realise that lie-flat doesn’t work for me – instead I’m always most comfortable at a slight slant. I fell asleep listening to Bridge of Spies and only woke up several times momentarily when the turbulence got a bit iffy.

Before I knew it, we were less than 3 hrs away from Hong Kong and the smell of breakfast filled the cabin. I quickly freshened up in the bathroom before anyone else got up and worked a bit while Ms Buddha was still snoring away.

Breakfast service started and similar to the previous flight, it came with fruit, muesli and this time a croissant. Fruit was fresh and tasty and I always like muesli; the croissant itself was tasty although could have been a bit warmer.

Next thing I had was the Congee – since that I still haven’t fulfilled the missing the rice during the trip. The Congee was surprisingly good and hot, which is always important. Ms Buddha went with the Cheese and Red Pepper Frittata which she cleaned everything off – so must’ve been good!

Meal service was smooth and coffee/tea was offered afterwards – given that I don’t normally have breakfast at all, my stomach was feeling the early morning meal, so was much too full for anything else.

The flight was about 15mins ahead of schedule and frankly it was one of the smoothest flights I’ve had in a long long time.